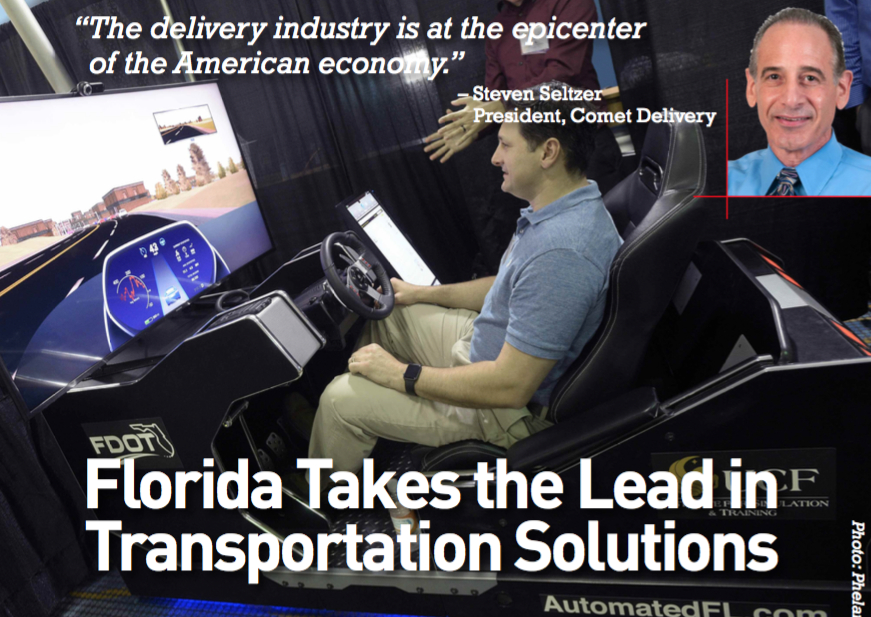 University of Central Florida student Andrew Best, explains the driverless car simulator to Jonathan Ford, with the Florida Department of Transportation, during the Florida Automated Vehicles Summit in Jacksonville, Florida.

Nearly every item that comes into your home or office made its journey by truck at some point in time, whether it was to a distribution center or a retail outlet.

Without a doubt, the delivery industry is at the epicenter of the American economy which means the most critical transportation issues have a ripple effect that ultimately impact business owners and consumers — for better or worse.

By far, maintaining our infrastructure is one of the biggest challenges we face because deterioration of roads, highways and bridges drives up the cost to transport goods, which leads to higher priced goods for everyone.

So as responsible business owners and consumers in South Florida, what can we do to make a difference? In my opinion, there are several steps we can take to set the stage for our region’s long-term success. They are:

• Allocate resources to improve our infrastructure

Repairing our infrastructure might seem an expensive proposition but the cost of doing nothing could lead to astronomical costs over time. Broward County recently passed a referendum to add a penny sales tax to the November 2016 ballot that would help fund essential improvements in our transportation infrastructure and mass transit system.

The more often we can get individuals out of their cars and onto mass transit, the more we can limit wear-and- tear on the roads. Commuters who make this transition can also save a significant amount in transportation costs. According to the American Public Transportation Association’s (APTA) February Transit Savings Report, Miami commuters who ride public transportation instead of driving can save an average of $716 a month or $8,587 annually! The All Aboard Florida rail initiative has made great strides in making mass transit a viable option for commuters in our region.

A new state law will allow riderless cars on Florida public roads for research purposes. The Florida DOT will initially look at the second level of autonomous cars which includes cruise control and lane centering when the car is on a highway. While the technology is not as evolved as a completely autonomous vehicle, these developments could conserve space on highways and create a draft effect, saving fuel costs. The research paves the way for potential use in commercial applications in the future including truck platooning, which links vehicles together like a train on the highway, separated by an invisible but calculated distance between each truck through vehicle-to-vehicle communication.

Stay tuned for future posts on the transportation issues that impact your business and your customers.